On Friday, September 13th actor Malik Yoba stopped by the Judge Joe Brown Show hosted by Valerie Denise Jones, where he discussed issues concerning the transgender community.  Despite some negative backlash and accusations received since his coming out as a “heterosexual” man attracted to (MTF) transgenders, Yoba states he received tons of support from some members of the LGBTQ community who applaud him for speaking against negative stereotypes that comes with cisgender men loving trans women.

Malik Yoba’s “I’m not gay, I like women with breast and penises” statement has gone viral, sparking much debate on social media. Some call the actor brave, while others coin him as delusional and attention seeking.

On Friday’s episode of the Judge Joe Brown Show, the conversation took a heated turn when the judge weighed in and gave his opinion of the controversy surrounding Malik Yoba “straight” with “no chaser.”

Do you applaud Malik Yoba for coming out and speaking his truth?  Do you feel he’s being authentic?  Or, do you feel Malik is pushing an Agenda and exploiting the LGBTQ community?

Take a listen and give us your feedback….. 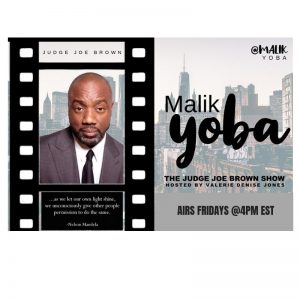