Alyssha Shanks, known as  “Leela Heart,” is the epitome of a homegrown performer.  This Maryland native has an infectious smile, a heart of gold and spirit for entertainment.  Her passion for creative arts and entertainment formed in early childhood.  She perfected her craft, studying dance and theatre for over 15 years.

Alyssha’s career strides to date are impressive, to say the least.  She has starred in and written over 50 stage plays and has traveled the world sharing her gifts.

Following up on a successful career in entertainment, Alyssha now adds the reigning title of Miss Globe Maryland 2018 to her repertoire.  While Alyssha’s love for performing and writing is evident, her passion for uplifting her community and surrounding communities remain at the forefront.  Alyssha plans to use her entertainment platform as a vehicle to push her philanthropic initiatives.

Alyssha Sharks is on her way to the nationals to compete for the title of Miss Globe USA. Be sure to keep up with and support Alyssha.

If you will be in or near Gwynn Oak, MD on July 8th, stop by the 16th Annual Happy Nappy Day 2018 for Poets In The Park Presented by Dreadz N Headz and meet Alyssha Shanks. Tickets are Avail On Eventbrite. 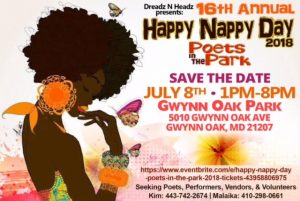