Author Christopher ‘Shake Banks’ Williams is a West Philadelphia native.  His debut novels “Tha Birth Of A Hustler parts 1&2″ have been receiving rave reviews.  What many may not know is, Williams penned both books while in prison.

Incarcerated at age 20 and serving a life plus 30-year sentence, Williams knows all too well how “street life” can wrap you up, spit you out, and leave you either underground or locked behind bars.  Despite his current incarceration due to a federal indictment, Christopher ‘Shake Banks’ Williams, is determined to not succumb to his environment.  Instead, he’s shifted his focus to growth and change from the inside out.

Christopher Williams current evolution teaches us two valuable life lessons:  “it’s not about where you’ve been but where you’re going,” and, “growth and change is possible for those who seek it.”  Williams is the epitome of positive change and growth.  Instead of sulking over his past mistakes and holding himself bound by them, he’s accepted his wrongdoings and has channeled his energy to shifting his mindset and actions.  Williams is dedicated to living a purposeful life with hopes of inspiring others to be the change they wish to see.

Christopher “Shake Banks’ Williams is currently awaiting an appeal and is seeking a commuted sentence for his non-violent drug offense.  He is eager to right his wrongs and use his voice and presence in the community to mentor at-risk youth in hopes of preventing them from traveling down the same road he once did.  Williams is a father, brother, sister and friend.  Most of all, he is a man who seeks the chance to show the world what “positive change” looks like.  His goal is to rewrite the spoken and unspoken negative stereotypes people have of ex-offenders.  He looks forward to the day when he can reintegrate into society and become a productive member.

Christopher Williams debut novels  “Tha Birth Of A Hustler parts 1&2.”  are inspired by true-life stories in urban fiction form.  The novels shed light on the issues many face within the black community: breakdown of the black family, poverty, drugs, violence and incarceration.

“The content may come across as a negative lifestyle but the message in the novels is meant for one to read and comprehend — chasing a fortune can be done differently.” –  Christopher ‘Shake Banks’ Williams 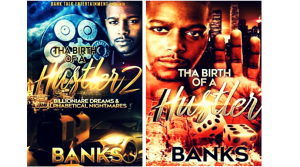 Williams’ is currently working on his upcoming novel “20-3-1″.

This book will showcase the maturity and mind frame of today’s Christopher Williams.   This should clarify any and all negative things one may say about Tha Birth Of A Hustler series – Valerie Denise Jones, The American Disease Project

Tha Birth Of A Hustler parts 1&2 are available for purchase on Amazon.