Calling all lovers of Go-Go near and far!!  If you’re a lover of that Go-Go music and a fan of stage plays, this event is for you.  “The Giz” Go-Go Musical was inspired by the late Legendary God Father of  Go-Go Chuck Brown.  It offers a new-age spin on the classic movie “The Wiz,” and pays homage to the Go-Go genre of music which originated in Washington, DC.

The play will showcase talented actors and performers in the DMV who are game changers in their industry.

“Dorothy, (also known as “Dottie”), a young lady, born and raised in North Carolina, wants to attend college at Howard University in Washington, DC.  Dorothy’s grandmother, fearful of big city life is hesitant of letting her go. However, curious about her father’s Washingtonian roots and his love of Go-Go Music, Dorothy insists on going. After a heated discussion Dorothy goes outside to cool off.  She then gets caught in a thunderstorm and transported to a mysterious place called Munchkin Land (PG County, MD).  She soon learns that her only way back home is with the help of a powerful wizard in Chocolate City called “The Giz”.  As she goes searching for him, along with her chaperone “WB”, she befriends a few lovable characters who are facing their own challenges in life.  In their quest to find The Giz, they also encounter the Wicked Witch of Waldorf, who may be their biggest obstacle in achieving their goals.” -The Giz Facebook Page 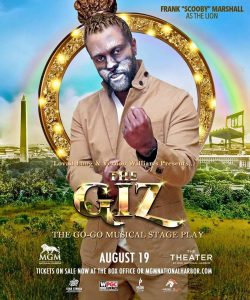 This is the first time a play of this such has been created and it kicks off at the MGM Theatre in National Harbor, MD.  Show support of this historic event.

Word on the street is this play will sell out quick.  Don’t delay, grab your tickets today! You can thank us later ?

Tickets Avail on Ticket Master via this Link